How to describe the emotions?

By telling stories that sublimate them. While I chose classic artistic paintings through history and mythology concepts, the jewellery specialist Katerina Perez paired them with jewels that evoke similar feelings.

Discover them with the video. Understand their links with the description of each emotion below. 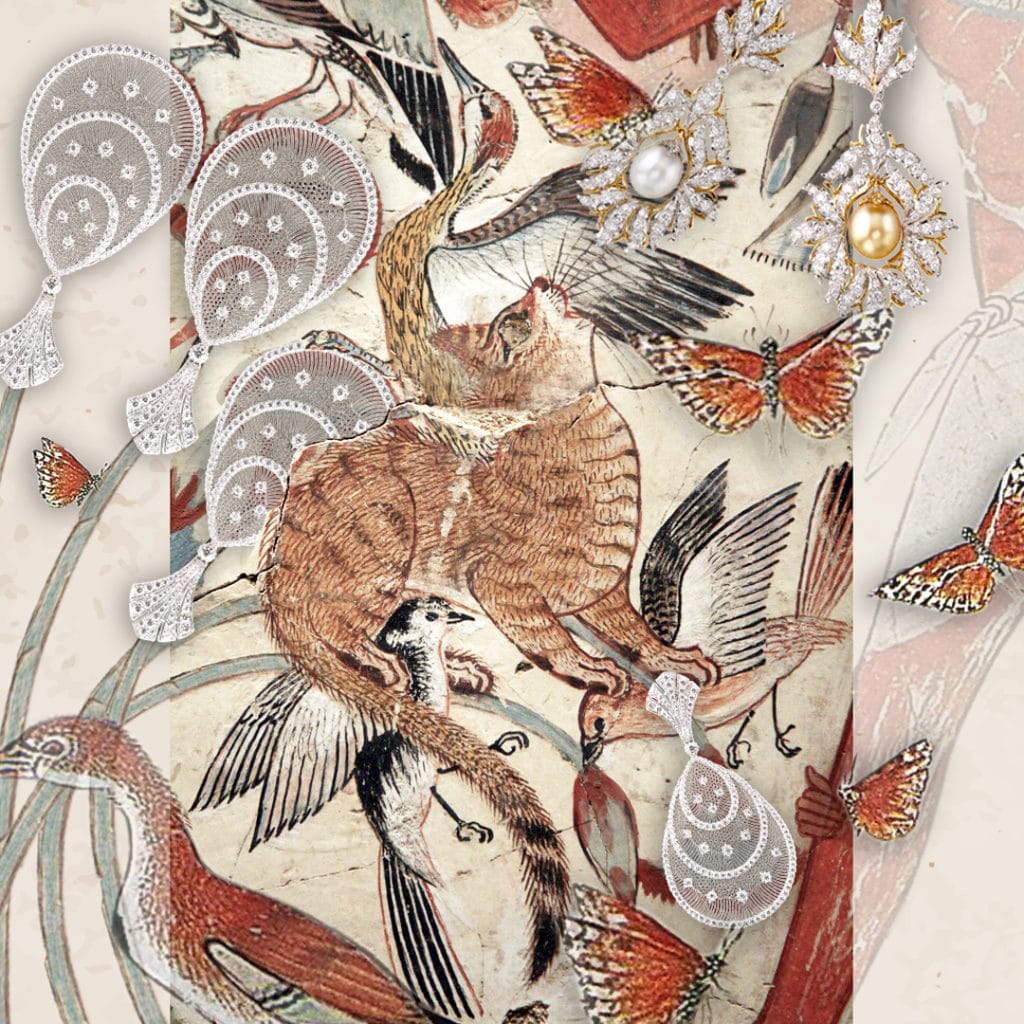 Discover the union of the jewellery of Italy’s Buccellati with an historic mural painting by an unknown artist on the tomb of Nebamun in Egypt. The birds hunting the fishes correspond to the nocturnal passage over Noun (God representing the first ocean = water of the Creation whose the Nile is one part and on which others Gods navigate, like a bridge between our world and theirs.) The flight of birds symbolizes the ascent to the sky. The Egyptians hoped that after death they would follow the bark of Gods along the Nile into the light.

How to encapsulate love? With Boucheron and its arrows of diamonds, alongside sumptuous birds and their soft plumage. Also with Sandro Botticelli, the famous Italian painter who created the iconic “The birth of Venus”.

For a thousand years, nothing like this had ever been seen in Europe. Prior to this painting, it was only the sinful Eve – the incarnation of lust and sin – who was presented undressed in an artwork, before she was driven out of Paradise, bowed in shame. Here, we see the goodness of love accompanied by a shower of flowers – Botticelli’s interpretation of the birth of Venus. According to the Greek poet Anachréon (580-495 BC), a bush of roses would have sprung from the earth when she set foot upon the shore for the first time, on the island of Cythera, after being born of the foam.

In “Theogony”, written in the 8th century BC, Hesiod also spoke of Anadyomene Aphrodite, meaning “out of the water”. During the battle of the gods, Chronos overthrew and emasculated his father Ouranos, the sky. When the seed of the latter spread in the waves, the goddess of love was born from the foam of the sea, fertilised by the sky. This is why the sumptuous Venus is often painted alongside the sea. 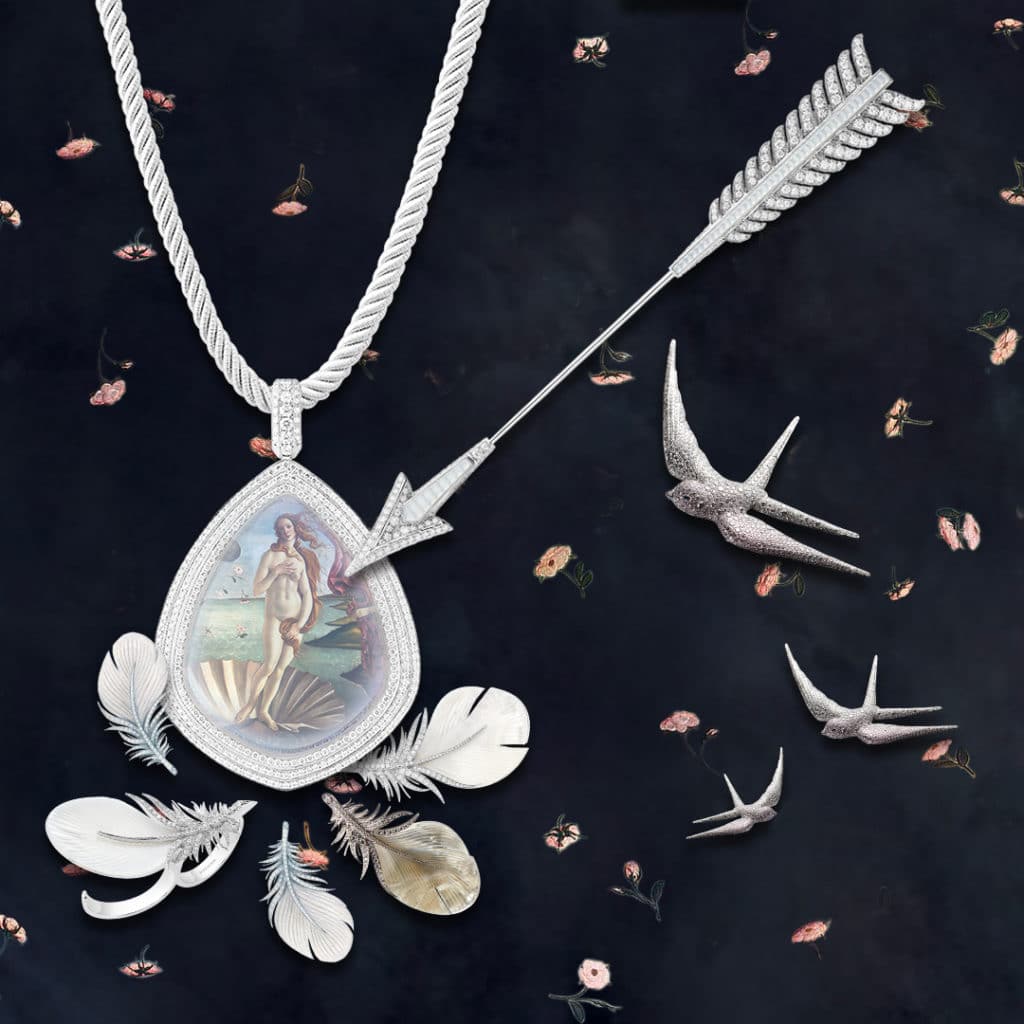 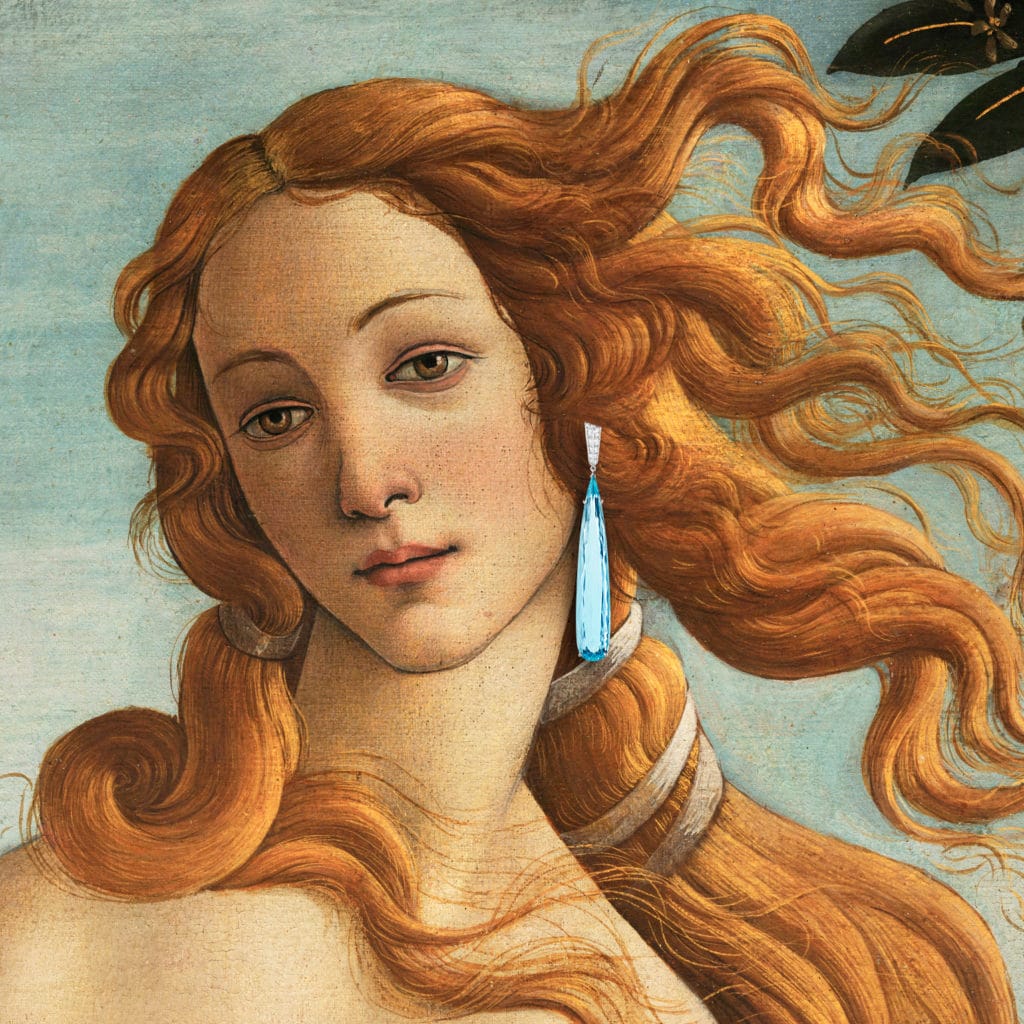 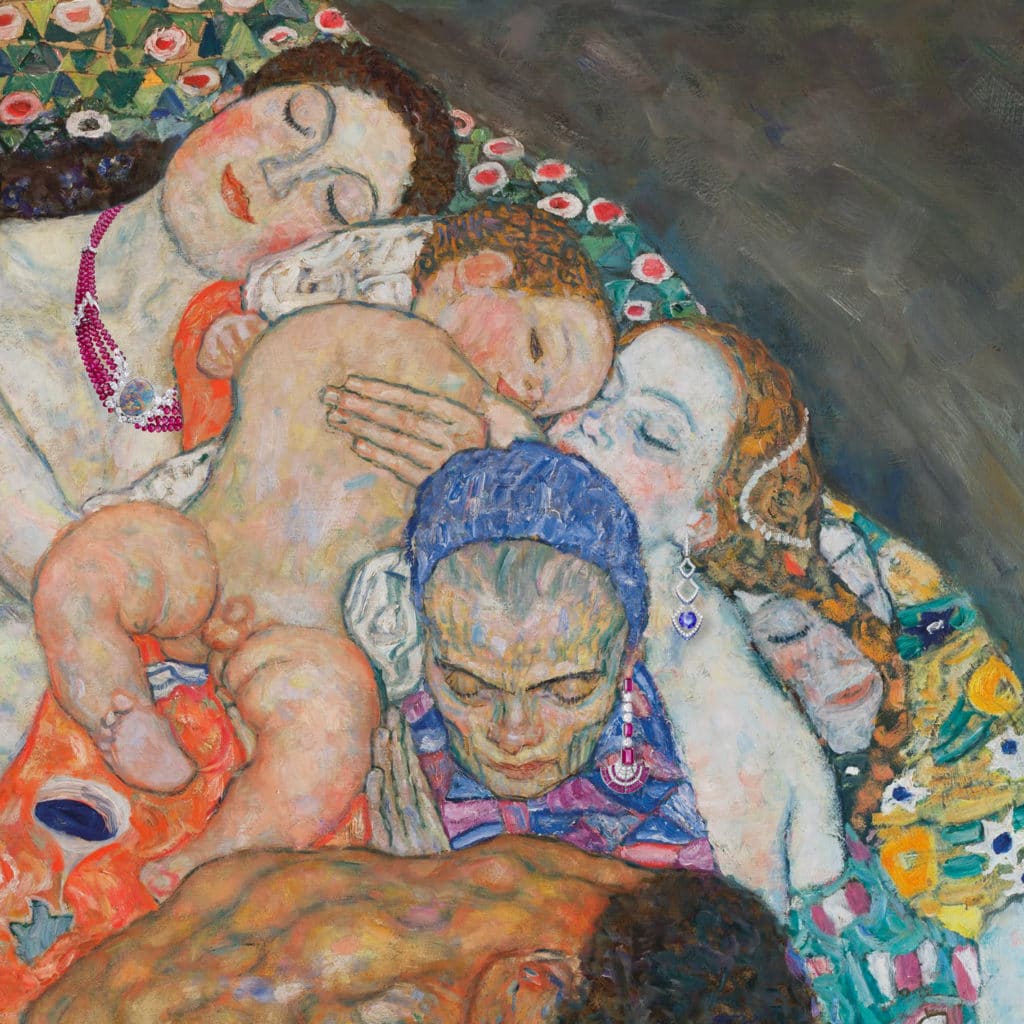 How to express happiness? Strangely, not with flamboyance but showing joy as soft, calm and serene. Here “Death and Life” of Gustav Klimt, one of his favorite themes. The artist created a kind of dance of death that is imbued with serenity: the humans do not feel threatened by death, they just ignore it. The symbiosis of tones and the peace shared by the characters reveal a quiet joy that does not need ostentation but our little personal touch with Alder jewels.

Thanks to the Dosso Dossi painting (called « Whitchcraft » or also « Allegory of Hercules ») we discover different symbols of excitement. If the breast of the woman highlighting the fruits vase is obvious, the mask and the drum were used in the antic theatre, in the carnival and the Ferrara courts to express the world of danse, the mystification and the fantasies. The cheese was also seen as an aphrodisiac. Strange, isn’t it?
The sumptuous and colourful Bulgari jewels have been chosen to sublimate this world of fantasies. 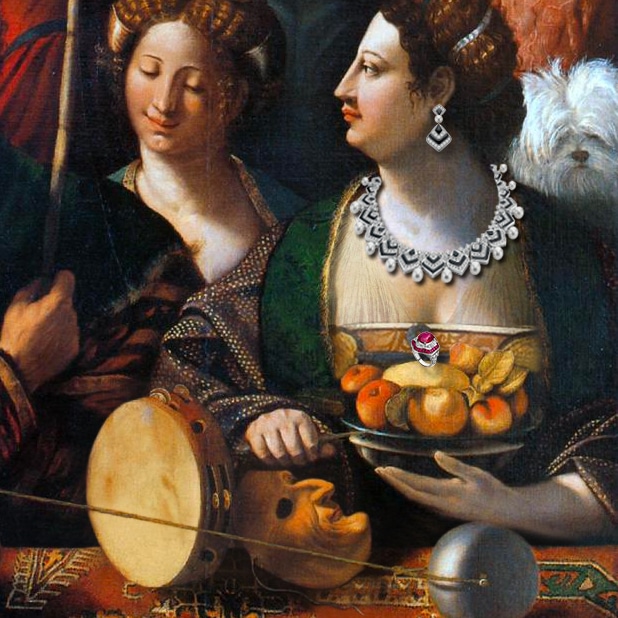 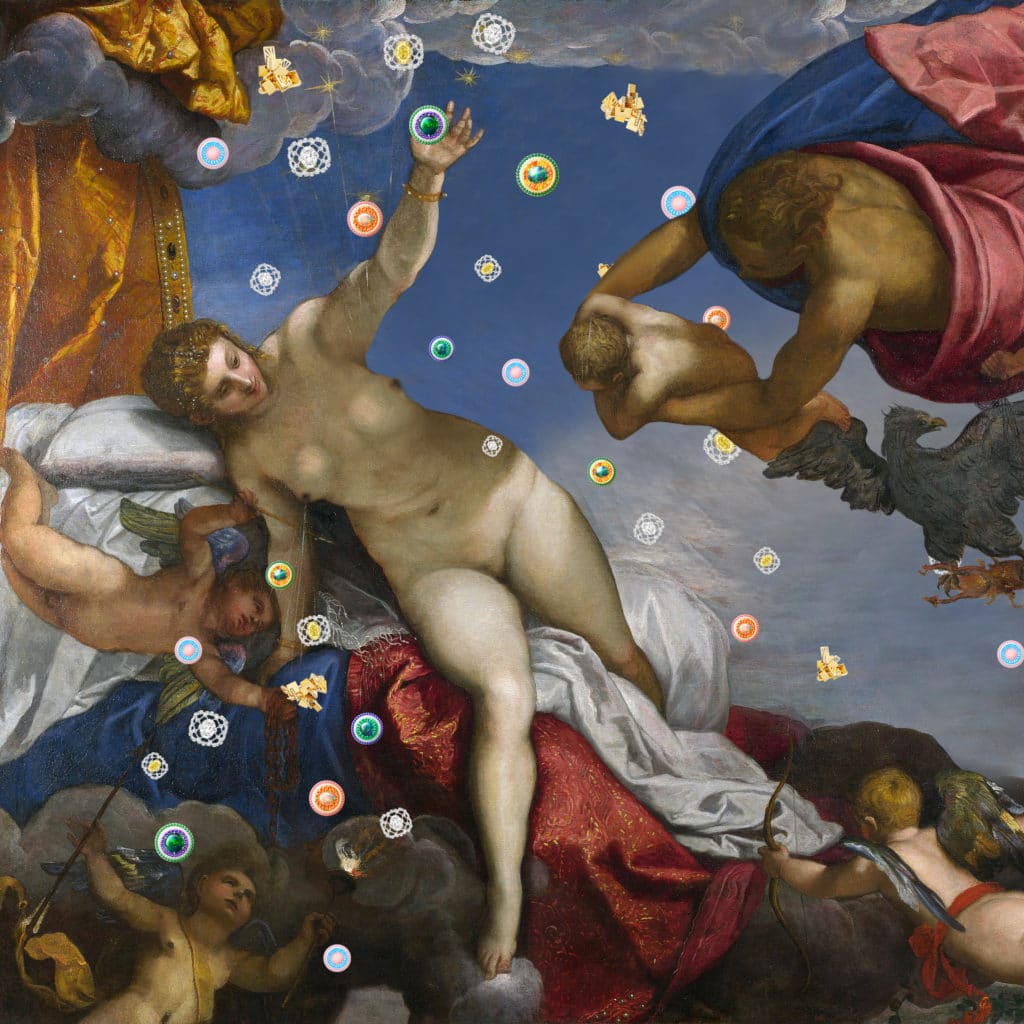 Here the surprise with The Origin of the Milky Way by Jacopo Tintoretto.

According to Greek mythology, Zeus cheated on his wife, the goddess Juno, with the mortal woman Alcmene. From their union, Heracles was born. While Juno slept, Zeus laid the child against her breast so that Heracles would drink the milk of immortality. The baby began suckling with force, which awoke Juno with surprise, causing drops of milk to stream across the sky, where they turned into stars. This is how, in the 1st century BC, Gaius Julius Hyginus, librarian to the Emperor Augustus, explained the origin of the Milky Way. This amazing Chaumet ring makes us think of the galaxy and its’ jewels came to replace the stars of Jacopo Tintoretto’s painting.

When the characters of Pietro Longhi painting “Il Ridotto” enter without invitation into the painting of Francesco Guardi (also named “Il Ridotto”), we have the perfect representation of the symbols linked to Carnival: the art of disguise and assuming the identity of someone else to be who we want to be, escaping the codes dictated by etiquette. The pleasure of freedom and the dissimulation by games are showed here, more the decadency of the society. And the beautiful and colorful Italian jewellery of Pomellato is perfect to highlight the extravagancy of such a timeless Venetian event. 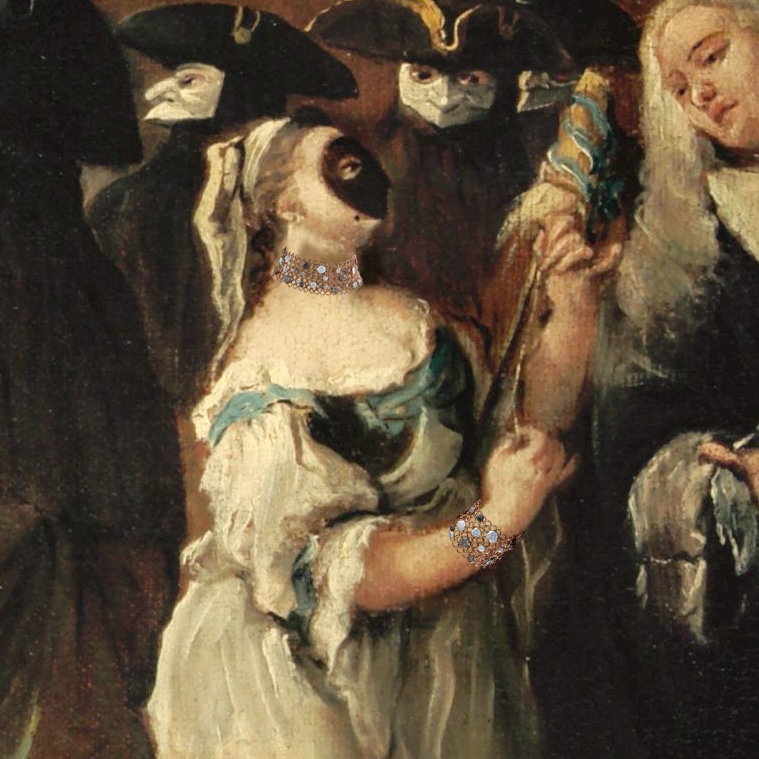