The jewelry universe is rich in myths and curses. Some gems are legendary for their mystical origins, mysterious stories, and the tragic fates of those who owned them. Discover the darkest jewels.

Legend has it that the Hope Diamond (originally named the “Blue Diamond”) was stolen from a Hindu temple from the eye of the goddess Sītā by a priest, who was allegedly tortured and condemned to death for sacrilege.

He arrived in Europe and more particularly to the King of France Louis XIV through the jeweler Jean-Baptiste Tavernier. It is rumored that Tavernier would have been devoured by wild dogs during a trip to Russia after selling the diamond. Louis XIV would have died shortly after having acquired the stone. The fate of the latter was also linked to that of Queen Marie-Antoinette who was beheaded with her husband. The diamond was also in the possession of Henry Philip Hope, one of the heirs of the banking company Hope & Co, hence the name “Hope Diamond”. Her grandson would have died penniless.

The diamond went to Cartier who sold it to a wealthy American heiress Evalyn McLean. The latter amused himself by wearing the cursed jewel on social occasions out of insolence to the curse. Maybe she should have been careful because her son died in a car accident and her daughter died of an overdose. Finally, her husband cheated on her and parted ways with her for another woman. She died alone in a hospitalized establishment.

The Hope Diamond was auctioned in 1949 and acquired by famous New York jeweler Harry Winston. The latter donated it to the Smithsonian Institution in 1958. It is interesting to know that the Smithsonian received a number of letters suggesting that the acquisition of such a mysterious stone by a federal institution meant bad luck for the whole country.

The Hope Diamond is currently on display as part of the National Gem and Mineral Collection at the National Museum of Natural History in Washington, and no one has suffered its wrath ever since. 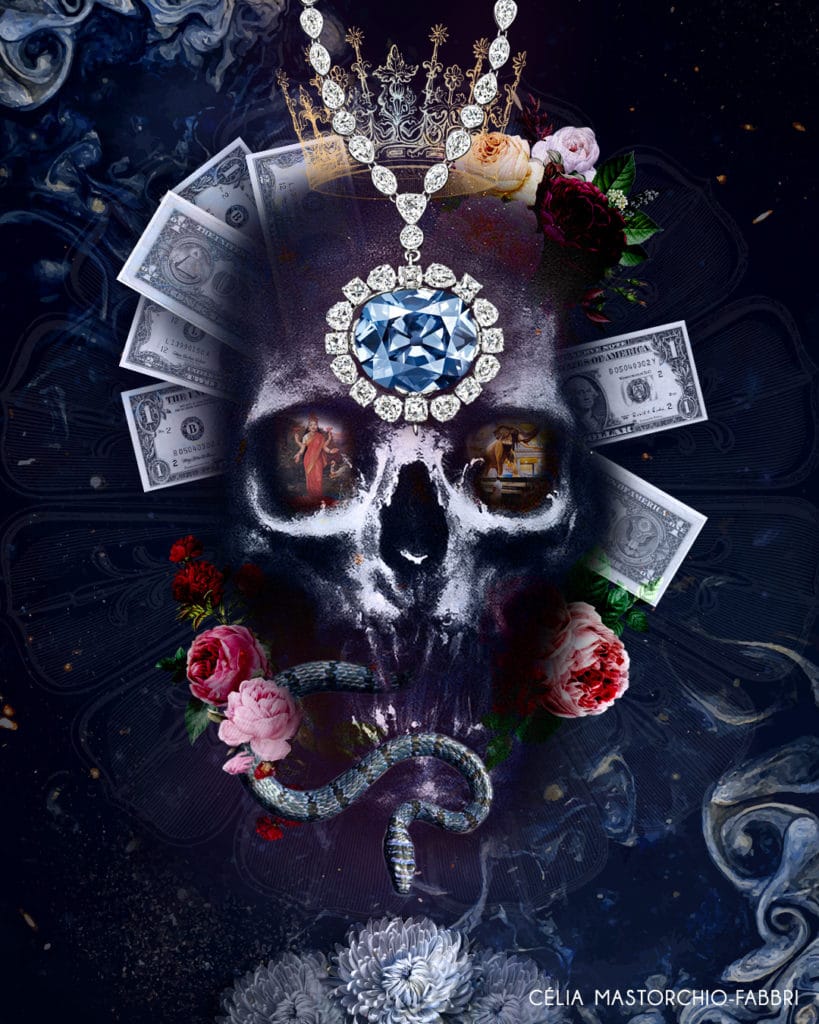 – The skull refers to the decapitated head of Marie-Antoinette. The crown on his skull represents royalty who suffered the wrath of the jewel.
– The flowers are linked to Sītā, goddess of vegetation.
– In the left eye of the skull is a representative painting of the goddess Sītā (origin of the diamond) and in her right eye a room of the National Museum of Natural History (current location of the diamond).
– The dollars refer to the wealthy American heiress Evalyn McLean and her tragic history. The serpent is the symbol of both death (of her children) and betrayal (of her husband). He’s heading for chrysanthemums, also meaning betrayal in the language of flowers. 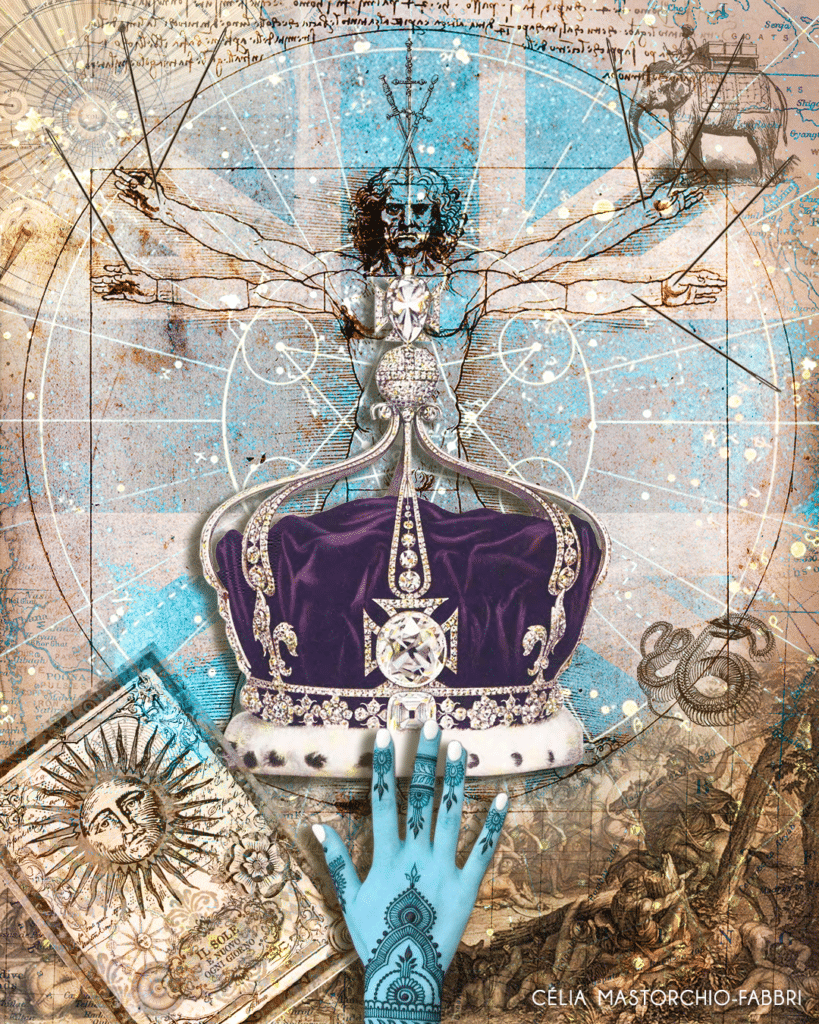 MEANING:
– Da Vinci’s man with the needles represents the suffering of men.
– The background with the English flag refers to its current country of residence and its owner Queen Elizabeth II.
– The blue female hand that grabs the crown is an allegory of the woman who alone can own the jewel. The designs on the hand refer to the Hindu henna culture and therefore to India, the country of origin of the diamond, just like the elephant on the right.
– The war scene and the snake in the lower left represents the violence of the events and the death that accompanied the cursed jewel.
– The map with the sun is a nod to the god Surya who, according to legend, offered this stone to the earth.
– In the background, almost invisible, is the map of India.

Currently a diamond of around 108 carats, the Koh-i-Noor (meaning “Mountain of Light”) was once 186 carats and was one of the largest diamonds in the world. Its epic is “a story of incredible violence“, according to British historian William Dalrymple.

Before being exhibited at the Tower of London on a royal crown, the Koh-i-Noor witnessed the destruction of many Indian empires. It went from one owner to the other to the rhythm of conspiracies and violent deaths. Its crazy journey lasted until 1850, when it was taken by the East India Company and given to Queen Victoria of England.

Originally, some Hindus believed that the Koh-i-Noor was a gift from Surya, the sun god, to the earth. Others believed that this diamond was stolen from the god Krishna during his sleep. According to tradition, its owner would be the master of the world, but the stone would be a source of misfortune if a man were to carry it.

And indeed, from poisonings with smashed heads, the most abominable tortures (like blinding a person with a white-hot needle or pouring molten lead on the skull of a Persian prince to discover the hidden location of the diamond) until to the threats on a 10-year-old Maharaja, the Koh-i-Noor has been a profound source of destruction and madness.

According to an ancient Hindu text, any man who acquired Koh-i-Noor would be dethroned and fall into disgrace: “Whoever owns this diamond will dominate the world but he will also know all its misfortunes. Only God or a woman can wear it with impunity. ”

Originally named “The Eye of Brahma”, in reference to the Hindu God of Creation, the “Black Orlov” is a sumptuous 195-carat black diamond. According to legend, it was stolen from a representative statue of the sacred idol.

After vandalizing the deity, the thief monk is said to have died in tragic circumstances. Years later, the Black Orlov would have resurfaced in the United States as European jeweler J.W. Paris imported the diamond in search of a buyer. A few days after the transaction, J.W. Paris threw himself from the top of a Manhattan skyscraper.

Fifteen years later, the jewel found its way to Rome, in the hands of Russian Princess Nadia Vyegin-Orlov. In 1947, she sold it to Leonila Galitsin-Bariatinsky. Shortly after, the two princesses commit suicide a month apart. Following this wave of suicides, the diamond was named Orlov, in reference to one of its owners.

In the hope of breaking the curse, the stone was cut into three pieces including a 67.5 carat cushion. Only this fragment, mounted as a necklace, has become famous in the world of jewelry in history. 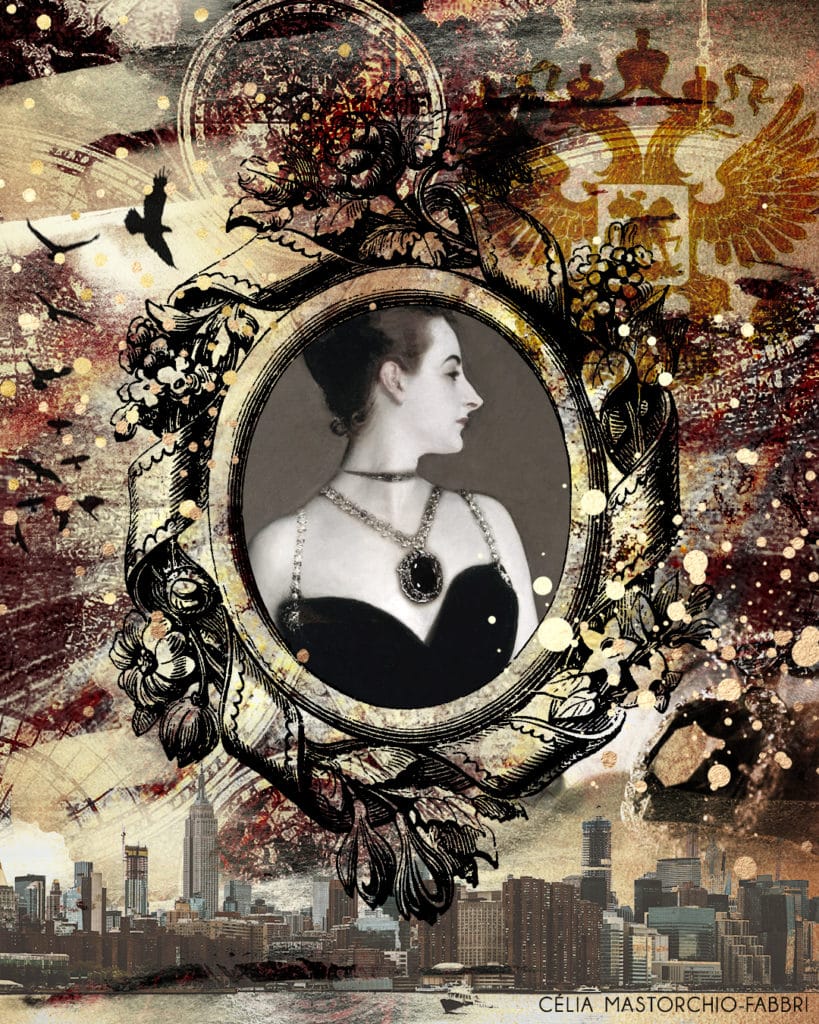 – Manhattan, depicted at the bottom of the collage, is the city of the so-called first suicide.
– The woman with the necklace is in the image of Nadia Vyegin-Orlov. The graying tones in the photo and his cut neck signify his death.
– The gold stains poetically reveal the blood that accompanies suicide.
– Crows are an allegory of death.
– The acronym at the top right is the emblem of Russia, cradle of the two princesses. 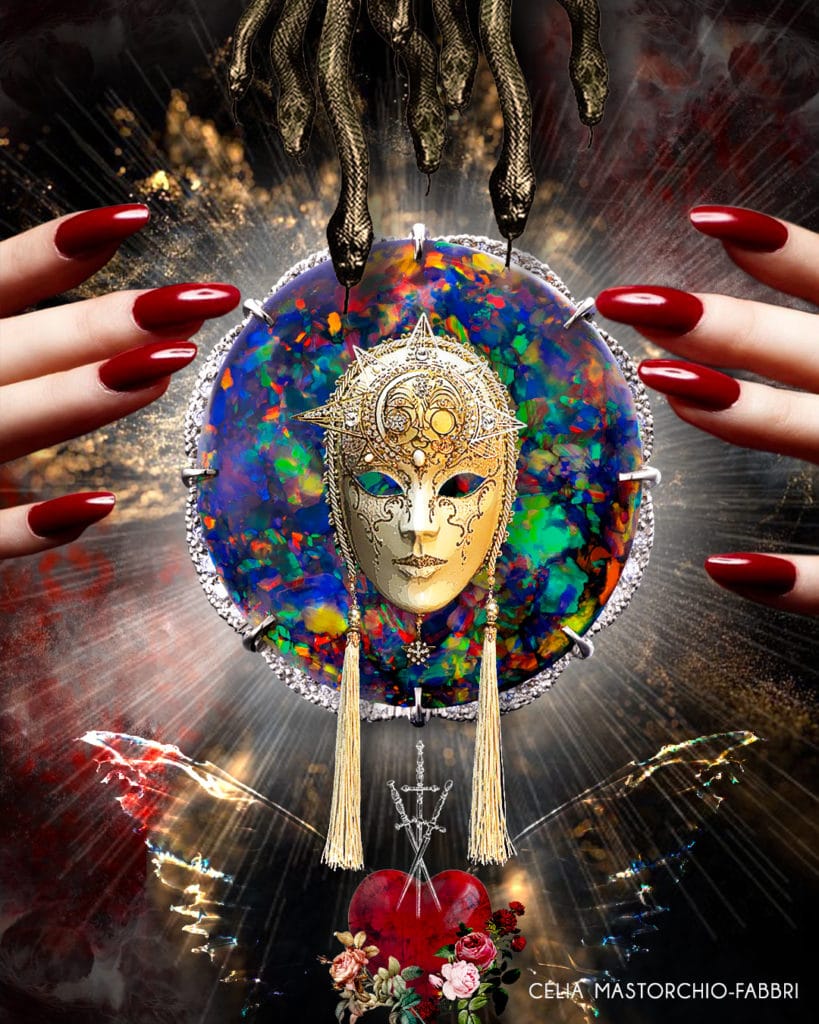 This story goes back to the times of the Spanish monarchy. King Alfonso XII fell head over heels in love with aristocrat Virginia Doini, Countess of Castiglione. However, he chose the crown and broke his relationship to marry his cousin Maria Mercedes of Orleans. Heartbroken, Virginia Doini gave the bride a gold ring set with a splendid opal. The jewel pleased the queen when she wore it frequently. She died of a mysterious illness only five months after her marriage.

At the end of all his deaths, Alfonso XII felt responsible and decided to wear the jewel as a penance. He died at the young age of 28. His widow, Queen Maria Cristina of Habsburg-Lorraine decided to break the curse by sending the ring to be blessed and transformed on a gold chain to adorn the neck of the statue of the Virgen de la Almudena, Patroness of Madrid.

– Snakes are the sign of the betrayal of the king who chooses the crown of love. They are also the death that affected many victims.
– The heart, the roses (flowers of love) and the burnt wings represent love scorned and therefore dead.
– The human hands with the blood-red fingernails are those of the various deceased.
– The mask on the opal is in reference to the statue of the Virgen de la Almudena, a non-lifeless being who alone can face the power of the Cursed Jewel and defeat it.

In 1890, the writer Edward Heron-Allen received it. Shortly after, this rational being gave up all reason and suffered the consequences of the curse. In 1902, Heron-Allen loaned the Delhi Saphirre to a friend who was immediately beset by a series of unlucky events.

The gem went to Heron-Allen. Frustrated, he threw it into the Regent’s Canal but it came back to him. Indeed, a few months later, the jewel was taken out of the canal and taken to a local jeweler who recognized it and returned it to its owner. As a final solution, Heron-Allen packed the Delhi Sapphire in seven boxes and deposited them in his bank vault with instructions not to be opened until his death.

Insisting that the box containing The Delhi Sapphire should not be opened for 33 years after his death, Heron-Allen’s daughter wisely sent it to the Natural History Museum in London. It remained there until 1972 and was discovered during an inventory. Along with the jewel, a note from the writer said:  “accursed and is stained with the blood, and the dishonor of everyone who has ever owned it.” 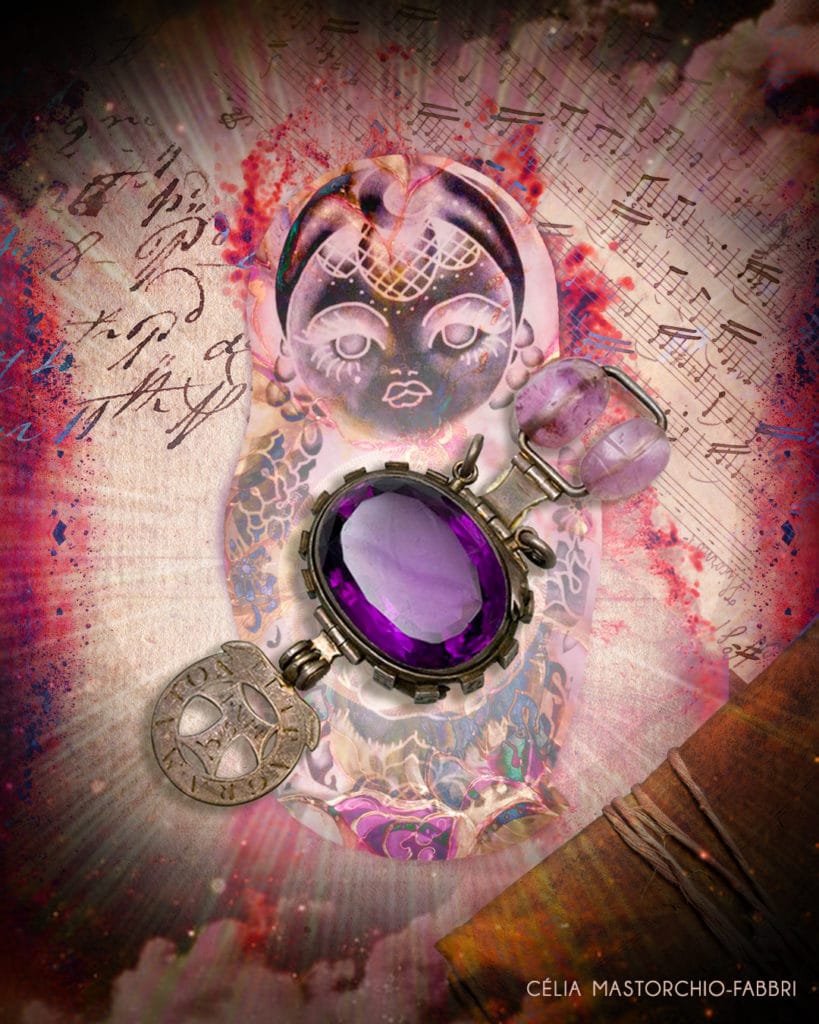 – The Russian doll represents boxes within boxes.
– Musical notes are the image of the singer without a voice.
– Notes are the symbol of the letter.
– The stains signify the blood and dishonour of the owners.